Changing habits is a better way of changing your life than making goals. Let me show you why!

Being the new year, when I first started my outline for this podcast episode and blog post I wanted to call it something like:

How to slay your new year’s goals, or goal-setting that works.

But as I took a step back and thought about my last year, and I realized that while goals are an awesome way to change in certain instances…if I see what made the most lasting changes in my life, it wasn’t goals at all.

Why changing habits is more powerful than setting goals

I am all about setting goals, and it’s usually my go-to method for achieving something, but this year I have really tried to take a step back and work on my habits instead.

Habits dictate so much of what we do in our lives, and as we work to create good habits we will see slow but permanent behavior change start to emerge in a way that takes less effort than traditional goal-setting.

I am sure you have heard that it takes 21 days to create a new habit.

I am also pretty sure that you could tell me about many instances where you have changed a behavior for more than 21 days only to fall right back into old habits.

Did you know that this 21-day thing is a total myth?

It’s comes from a Plastic Surgeon named Maxwell Maltz in his book psycho cyberkinetics about self-image. In this book he states that it took his clients roughly 21 days to get used to their new image after surgery.

He also noted, that in his own life he noticed it took a minimum of 21 days to form a habit.

So, our idea that it takes 21 days to form a habit comes from a book that is usually mis-quoted where zero actual research was done.

So how long does it actually take to form a new habit?

Let’s dig into some actual research, shall we?

A study posted in the European journal of social psychology found that it took anywhere from 18-254 days to make a behavior change regarding eating or drinking habits.

This range is huge, and most individuals took much longer than the expected 21 days.

Not to mention, that even this study has it’s limitations. This study looked at only 39 individuals, and only habits related to eating and drinking.

The takeaway? Changing habits is complex and different for everyone!

Why goals aren’t always the best way to success

So what is the best way to work on changing your habits? Should you make a goal?

There are loads of books out there on habit change, and this topic is sure to come up more on another day, but in my experience changing a habit looks just a bit different than a goal. Let me give you an example of a goal that I set that would have been more effective if I had looked at changing my habits instead.

This summer I made a SMART goal to lose 15 lbs by the end of summer. If you aren’t familiar with the SMART model, the idea is to achieve your goals it should be specific, measurable, attainable, realistic, and timely.

So let’s make my goal to lose 15 lbs a smart goal.

Measurable-Yup, you can measure the number of lbs

Attainable-As a dietitian, I know that weight loss at a rate of 1 lb per week is a reasonable and healthy goal

Realistic-This one is questionable, I should have probably accounted more time for plateaus etc…but as stated earlier, a weight loss of 1 lb per week when making appropriate changes is fairly realistic

Timely-Yup, I would complete my goal by the end of the summer.

So let’s look at what actually happened. I made drastic lifestyle changes to make this goal happen including cutting out sugar almost entirely, increasing whole foods, decreasing carbs and overall calories.

The next week however, I was up 3

This pattern continued and at the end of 7-8 weeks I gave up, because suddenly my SMART goal was no longer attainable in the time allowed.

This is why I think that goals are not always the best tool for the type of change we need to make.

If you want to run a marathon by a certain date, then having a SMART goal to get there might be just what you need!

But other times, when success doesn’t come, that SMART goal model can cause you to feel like a failure and motivates you only to give up on your goals.

What I decided to do instead

Luckily, I don’t give up easily. So even though I gave up on my particular SMART goal, I knew I still wanted to make changes.

So I started thinking about my habits. I am the queen of mindless snacking, I walk into the kitchen and I open the cupboard for a snack regardless of my actual hunger cues.

So for my first habit change, I decided I would try to drink a glass of water every time I felt like a snack. I wasn’t denying myself the snack, simply delaying it and seeing if water would do the trick.

I did this for a few reasons. First off, I knew most of the time that I was snacking I wasn’t actually hungry. I also know that mild dehydration can disguise itself as hunger.

I wasn’t denying myself a snack if I really needed it, but I found that most of the time, the glass of water and waiting 20 minutes took that craving and drive away.

Now the real question, did I lose the 15 lbs? Absolutely not (well, I actually don’t know for sure because I banned myself from the scale…but likely not).

BUT I made a change that I can stick to my whole life. It’s not restrictive or difficult.

Guess what else? Success is motivating.

Instead of feeling like a constant failure, I made a simple habit change that I can stick to forever.

After this change is a habit, I will likely desire further change. I can start introducing small, manageable habits a little at a a time until my eating habits have changed entirely.

Eventually, I will likely start to see some weight loss. But the cool thing is, weight loss is no longer my measure of success. Instead, habit change is the indicator of success and weight loss is a positive side effect, which is a much healthier mindset to have!

I chose to talk about weight loss in this post because I know it’s something relatable for so many people, but you can use this model in all aspects of your life.

I’ve also implemented habit changes in my business. I used to get hung up on number of followers, or how often I post in a week, or facebook likes as a measure of success. It was extremely disheartening.

This year, I decided to dedicate just 5 hours a week to working on my business. No other measure of success mattered to me anymore other than just putting the time in.

The other cool thing is because I haven’t put a timeline on my habits, I can expect the benefits to grow and help me throughout the course of my life as I continue.

Changing your habits is a slow process (so much slower than 21 days) but so much more rewarding, effective- and do-able than the goal-getter culture we live in.

How can you change your goals mindset to a changing habits mindset?

What goals have you made over and over again that you have failed at, that you could instead shift to small habit changes that you can totally achieve and motivate you for more change and success?

I’d love to hear, let me know in the comments or join me in my meal planning and prepping facebook group

Also, if you’d like to take the overwhelm out of meal planning, take my free mini course, meal plan magic. *Hint: it consists of small, actionable steps you can take to move towards homemade meals in a way that is simple and sustainable (aka: I practice what I preach in this post!

How the 21-days to a habit myth formed

How habits are formed

How to shift your mindset for meal prep

Amanda is a dietitian turned mom and food blogger. Her goal is to change lives one family at a time by providing easy, from scratch, family friendly recipes that the whole family will enjoy!

This site uses Akismet to reduce spam. Learn how your comment data is processed. 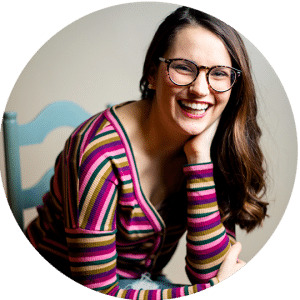 but my friends just call me Betty Crocker. My goal? To share all my secrets to make you feel like a rockstar in the kitchen and to make 100% from scratch cooking do-able, easy, and fun. 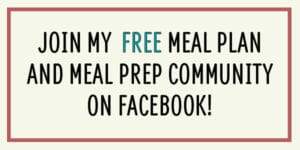 Sign up for email updates to get this complete Thanksgiving guide filled with recipes designed to reduce stress and give you time to spend with family!