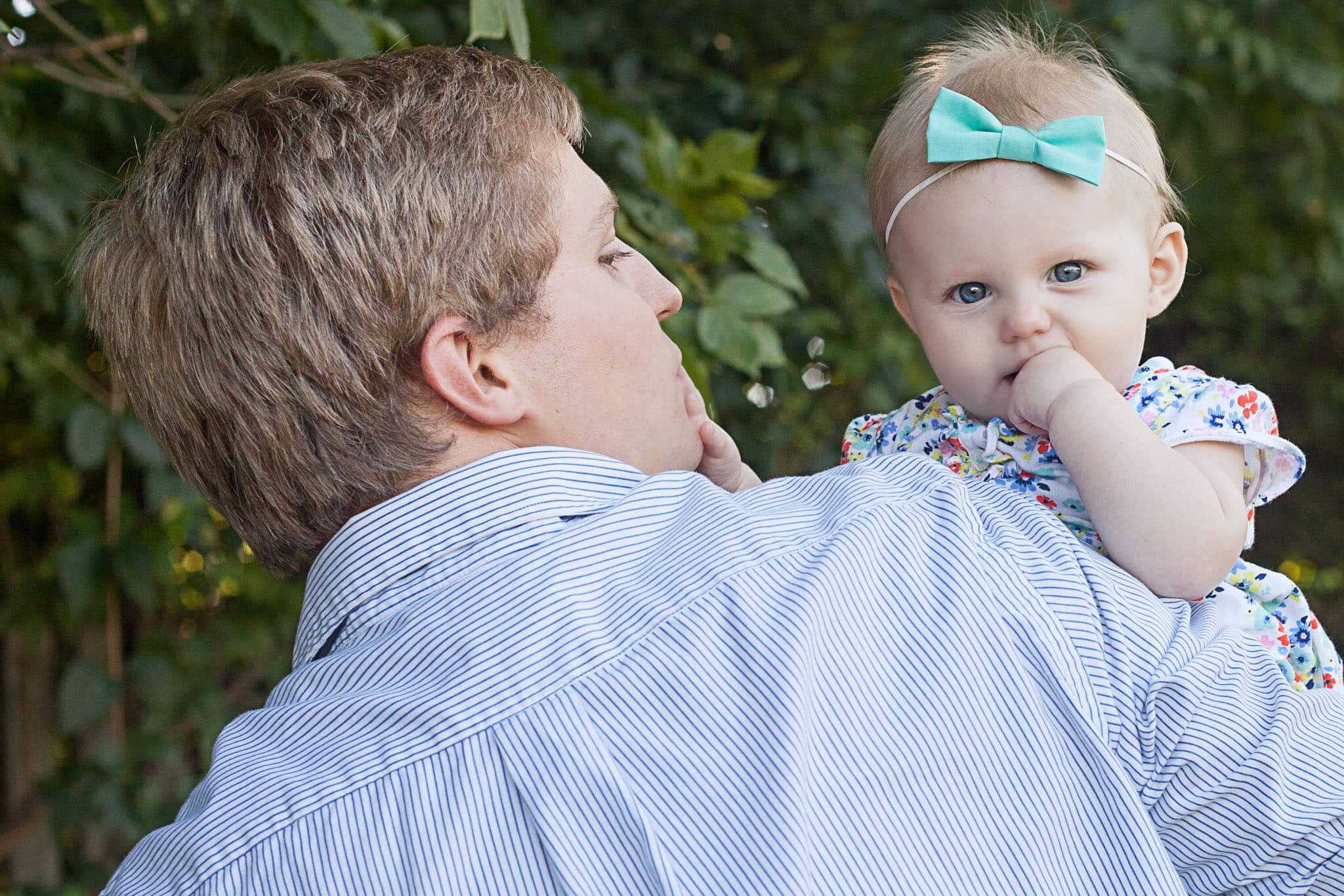 My Goodness, I can’t believe that I have a 6 month old.

Probably  because she still sleeps like a newborn…and thus I feel like it’s been one eternal day since she was born. Okay, okay, it’s not that bad…in fact she seems to adjusting to our new apartment and she only wakes up twice.

…and I just try not remember that everyone says that babies can sleep through the night at 6 months…and then it’s not that bad…I guess.

Her cuteness makes up for it. Most of the time at least…although I can’t see her in the dark in the middle of the night…so sometimes it’s hard to remember…

She has been in a little tiny bit of a fussy funk lately, but the last few days seems to be getting out of it.  I guess cross-country moves make her grumpy.  I get that.  Oh hey everyone, we moved…across the country

and I love it here…I miss having friends, so we’ll have to remedy that situation soon, but I can’t believe I like being in a big city.  Strangely, it feels smaller in some ways than the small ish city we came from.  Mostly because it’s so big that there is space.  There are also like 50 of everything you could possibly need walmart, libraries, grocery stores, gas stations, so they aren’t so overcrowded…and there are more roads than “Main Street” making the roads less busy as well! It does have it’s downsides…like I think 5x the smoking population of any other state in the nation…which is fun with my little baby…but overall we’re happy!

This might be my favorite picture that I have ever taken, ever.  There is no doubt who this little girl’s daddy is.  I mean, before she was born I wondered, but now I am positive! 😛 This 6 month old is so much fun.  She is incredibly curious!  She wants whatever mom and dad have!

…and whatever we have she wants in her mouth.  Lovely.

She is a tease, she loves to get a reaction out of Mommy and Daddy.  She is all smiles at strangers.  She is a social butterfly and never cries when we take her out.  Which leads people to tell us what a wonderful baby she is…and we think she fooled you…but it’s okay…we love her anyway!

She wants so badly to be mobile and takes flying leaps out of our arms and straight ahead of her in sitting position which is kind of dangerous…She is still not so much of a mover, she occasionally rolls over from tummy to back, and is SO CLOSE to rolling from back to tummy…she’s like 3o degrees away and then rolls back to her back.  Stubborn silly girl.

She just started eating!  She has had rice cereal, oat cereal, and avocados so far…(and a few other things we have snuck her from the kitchen table…hey, we’re human :))  She LOVES avocados…not such a fan of the rice cereal (who can blame her…who could eat that without sugar!?) She also likes the oatmeal.  I can’t wait to try fruit but am trying to give her a chance to like veggies.

She is our blue-eyed sweetheart!

Welp, it’s that time again, another month has passed Seriously, I can’t get over that face.  This last month has been CRAZY for development.  I’ll start with the highlights.  This girl is FINALLY an AMAZING sleeper.  I’ma take a whole lotta credit for this one.  I read every gosh darn’d sleep book/blog/rant out there, and…

Yesterday I was perusing pinterest and my dear friend Paige had posted a quote from the LDS Primary Song A Child’s Prayer that really hit me. I remember growing up singing this song and always said it was my favorite, but had long since forgotten about it and hadn’t heard or sung it in years….

Sharing family responsibilities, the chores, the childcare, the cooking can be a huge source of contention in the home. While we don’t claim to be experts, my (kind and willing) husband and I are talking about how our expectations and roles have shifted through the years and how we manage responsibilities in our home. …

It’s been just over two weeks since we said goodbye to our little ones. I have been doing a lot of thinking and reading and pondering as I try to work through my emotions. I recently read a book that was given to me called “Gone too Soon.” It is a book specifically for those…

When our loss first occurred people said things would get harder before they got easier. I had a hard time believing that because I was in more pain than I ever could have imagined, and honestly for awhile things got better. I’ve read a lot about the stages of grief and one that usually occurs…

So normally I keep this blog pretty focused on food, but for today I am going to be selfish enough to believe that all of you want to know about my person life.  Thanks for indulging me. Today we celebrate three years since our twins Joshua and Adelaide came and left this earth.  (If you haven’t…