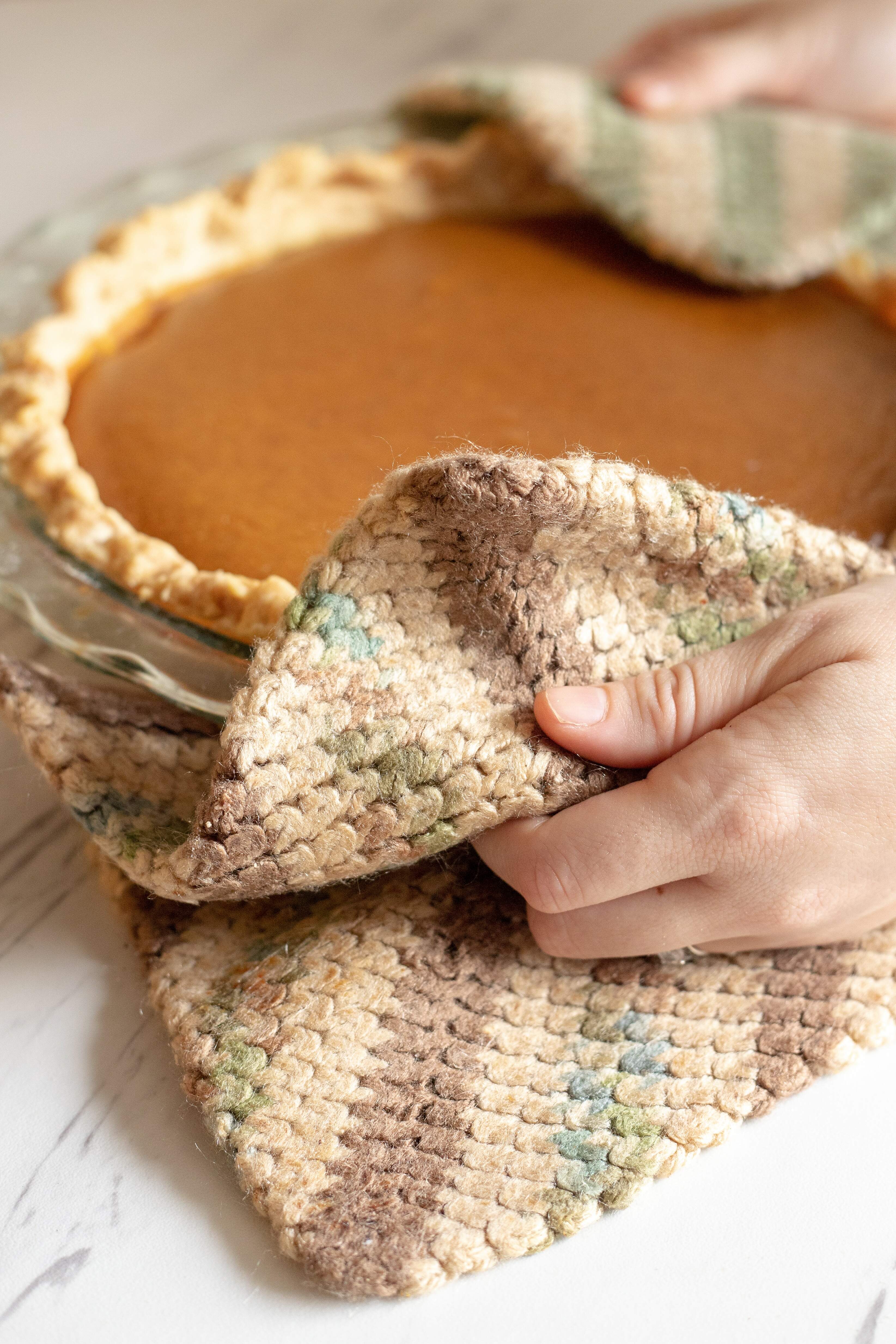 Homemade pumpkin pie is the easiest pie for a beginner to make, the filling comes together in approximately 2 minutes.  The crust is a bit more time-consuming, but this butter and shortening pie crust comes together quickly and easily and can even be rolled out immediately without refrigeration.

Homemade pumpkin pie might just be the easiest pie to make from scratch there is.  It’s so hard to mess it up.  I know ya’ll think those costco pumpkin pies are just too easy to pass up, but you can totally do homemade pumpkin pie, and it will be even more delicious with tender, flaky homemade pie crust and creamy pumpkin-y filling.

What kind of pie crust is best for homemade pumpkin pie?

I made a truly astonishing discovery this year.  I try to use the real-est ingredients in my cooking, so naturally since I began baking I’ve been using an all-butter pie crust.  It’s delicious.  However, it’s not foolproof (at least not for me).  I read just about every pie crust post on the internet and tried so many tips and tricks.  Food processor, sour cream in the crust, etc…but no matter what I did I had a hard time rolling out my all-butter crust and when I baked it it would shrink and get ugly on me.  It still tasted amazing…but I really wanted beautiful homemade pies.

After having my third child this year I started feeling a little rebellious.  We started eating more frozen meals and I decided to heck with it, I’m trying shortening in my pie crust.  The result?

The butter and shortening pie crust for this homemade pumpkin pie was far easier to work with and roll out than my previous recipe, it was flaky, tendery, and full of buttery flavor AND it held it’s shape.

You could say I’m converted.  And due to the fact that trans fats are now officially illegal in the US I can feel a tiny bit better about my shortening pie crust.  Besides, no one’s eating pie for the health benefits right?  Butter and shortening crust for life!

There are a few keys to making a delicious pie crust for homemade pumpkin pie. The first rule of pie crust is everything should be as cold as possible.  Refrigerated shortening, frozen butter, ice water. You get the drill.  I like to use a box grater and grate the butter in, it’s super easy to distribute the butter evenly that way.  You’ll also want to freeze the pie crust for a while before baking to help it keep its shape.

Should I blind-bake the crust for homemade pumpkin pie?

Absolutely yes.  In fact, I almost always like to blind bake, but it’s especially important when making a custard pie like homemade pumpkin pie.  If you don’t blind bake, the crust you worked so hard on will be a gummy, yucky mess.  It’s an extra step that takes a bit of time, but it’s super easy so don’t stress.

I don’t have any fancy pie weights or anything, I simply poke a few holes in the crust  on the bottom and fill the pie crust with tin foil and dry beans so it doesn’t puff up while baked.  Easy peasy.

Remember how I said pumpkin pie is the easiest thing ever? I wasn’t lying.  All you do is mix up the 7 ingredients until smooth and dump them into your blind-baked crust.  That’s it.  Many homemade pumpkin pie recipes call for evaporated milk or sweetened condensed milk.  I can’t attest to how they taste, but my recipe uses heavy cream simply because it’s in my fridge always.  Is that normal? I digress.  7 ingredients and you probably have everything laying around but the pumpkin.  So no excuses for the store bought pumpkin pie. You’ve got this. You can also add other spices if that’s your thing.  Nutmeg freaks me out so this homemade pumpkin pie is cinnamon only.

When can I cut my homemade pumpkin pie?

Because homemade pumpkin pie is a custard pie it needs to set before you can dig into it (I know, it’s so hard to do).  You’ll remove your pie from the oven after about an hour and the middle will still be a bit jiggly.  I actually like to refrigerate my homemade pumpkin pie (it tastes so yummy cold) but you can also leave it at room temperature.  You will need to leave it for at least two hours (I usually leave it overnight) before cutting to make sure it holds its shape.

After all that waiting it’s time to dig into your homemade pumpkin pie, so grab a dollop or 12 of whipped cream and dig in.

Are you looking for more Thanksgiving recipes? This make-ahead stuffing recipe is getting lots of attention on Pinterest right about now.

Also consider trying the creamiest mashed potatoes in the history of ever.

For the pie crust

This slushy 4th of July drink is the perfect holiday treat for kids and families. It’s naturally colored using blueberries and raspberries, and flavored with limes and coconut milk.  I love the zesty flavor, AND that it’s made without any drink mixes.  Your kids will love it! A hot summer’s day, everyone decked out in…

After about 7 years of creating from-scratch thanksgiving menu plans I have finally nailed down a selection of recipes that work every time, taste delicious, and can be prepped without too much stress and I’m so excited to share these recipes, as well as my best thanksgiving menu tips for success with you. First the…

“> “> [shareaholic app=”share_buttons” id=”25739075″] Candy cane ice cream is one of my favorite Christmas time treats.  Making it at home is easy and even more decadent than the storebought version.  Though this version does have a custard base, it cuts down on fat slightly by using milk and fewer egg yolks than traditional custard…

Cheesy Potato Casserole, affectionately called “funeral potatoes” is comfort food to the max.  This rich, cheesy dish pairs wonderfully with Ham and is the perfect addition to your Holiday Table.  Nicknames can be a funny thing.  Sometimes they are loving and endearing, like when my sister calls me “panda.”  Other times they are flattering, like…