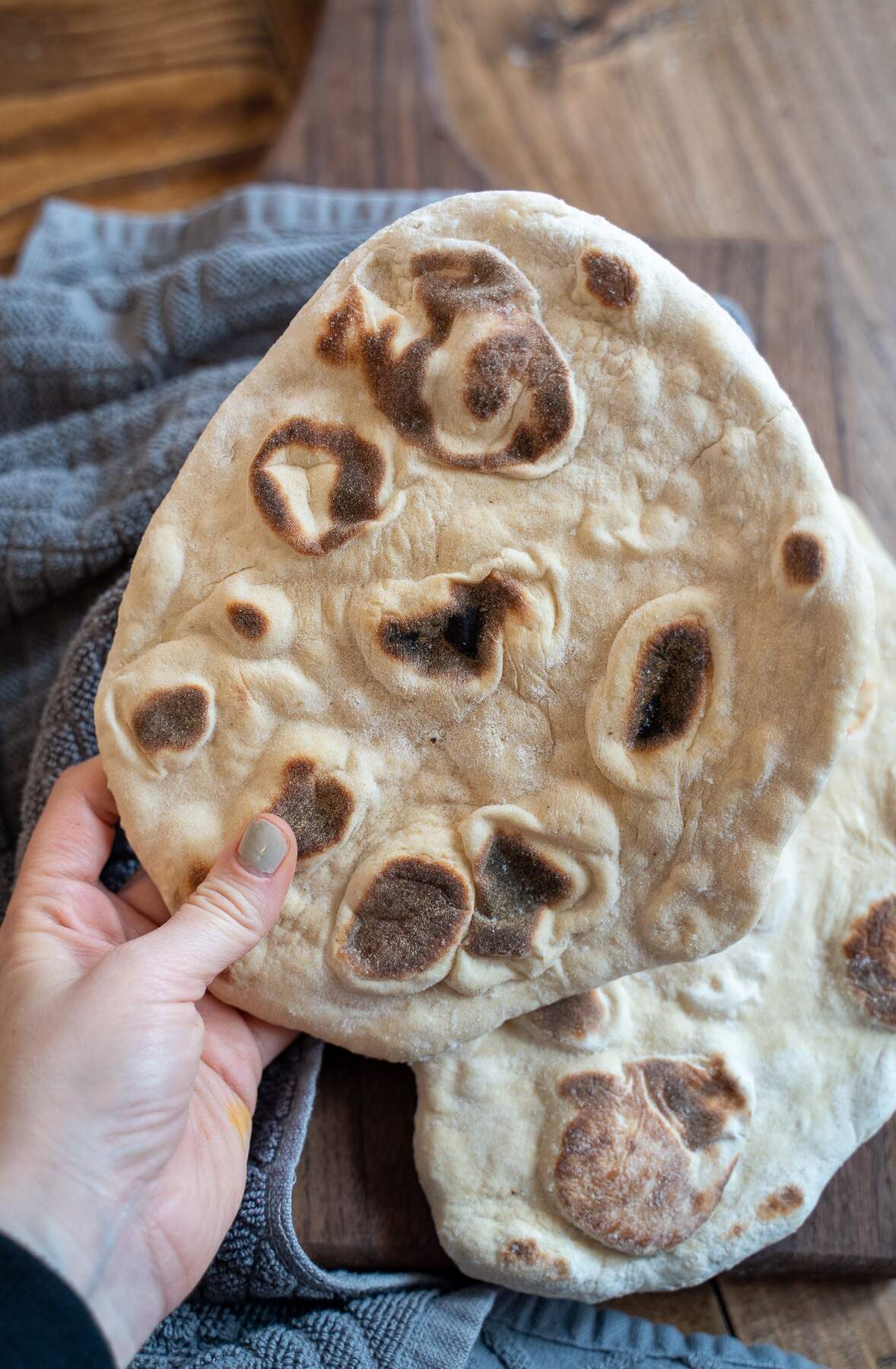 Homemade Naan Bread is seriously so easy, and so much more useful than just as a side for your favorite Indian Dishes (although, it’s great for that too!) I love keeping my freezer stocked with homemade naan and using it as pizza crust whenever that craving strikes!

Just after having my 3rd child, my husband and I signed up for a cooking class to take together.

If you’ve never taken one, cooking classes are such a fun date night!

The class we signed up for was quick and easy meals…and honestly, I wasn’t super stoked by the topic because I tend to like more elaborate meals.

I was so wrong, I learned SO many time-saving tips from that class, one of which was flatbread pizzas made on naan bread.

After that class I became hooked on naan bread pizza! I would make all kinds of pizzas, hawaiian, margherita, tomato and pesto, bbq chicken, all on naan bread which made cooking super quick and convenient and such a breeze.

The problem was, I was using storebought naan bread for all these dishes…which while it tasted great, it cost about $1.50 per naan bread so it wasn’t the best option economically.

I decided to try my hand at making my own homemade naan bread, and to make it JUST as convenient, I decided to store it in the freezer for quick and easy meals whenever I wanted.

Let me tell you it worked like a charm!

The biggest problem has been not gobbling all the naan bread up before it hits the freezer.

(Which is why this recipe is for a super-large batch, because if you’re cooking for the freezer, you want to make enough to make it worth it!)

This batch makes 16 naan breads, which is enough to feed my small family about 4 times (if we don’t eat the extra naans before they hit the freezer!)

How to use freezer-friendly homemade naan bread

As I said, my favorite way to use homemade naan is to make pizza out of it.

To make pizza, simply add your toppings and bake at 425 until the cheese is melted (about 6-7 minutes). I usually put my naan straight onto the rack in the oven instead of on a pan so it gets nice and crispy!

You can also use your homemade naan the traditional way by serving on the side of chicken tikka masala or your other favorite Indian Dish.

If you’re enjoying it this way, Saute some fresh garlic in a little butter and brush it on when you’re ready to eat. You can also sprinkle on some fresh cilantro!

Another option is to make it into a sandwich or wrap of some kind. This post has lots of good ideas!

As far as yeast bread goes, this ones pretty simple.

I do like to use instant yeast to make it even easier, but active dry works as well. If using active dry, simply add the sugar or honey, water, and yeast and proof the yeast in the warm water for about 10 minutes until it’s bubbly before adding the rest of the ingredients.

You may not even need all the flour in this recipe, especially if you choose to do part-wheat (which you SHOULD, it tastes great and can make this a slightly more healthful alternative than the storebought version). Start checking for the signs that your dough is properly floured once you’ve added about 5 cups and continue adding flour slowly only as needed.

To cook, you simply roll out thin discs and cook them like a tortilla on a skillet or griddle. They only take about a minute per side, and they’ll bubble up a little and brown slightly when they’re done. Cook until the bread is all the way cooked through.

This homemade naan is truly one of my favorite timesavers to keep on hand and it’s so yummy! Try it yourself!

How will you use your homemade naan?

To serve: This naan bread can be served with butter and garlic, as pizza crust, or as a pita/sandwich. If serving out of the freezer, simply leave out to thaw, or reheat in the oven or microwave until thawed and warmed through

Check out my other homemade bread recipes.

Strawberry Rhubarb Crumble is the perfect marriage of tart rhubarb,sweet and tangy strawberries, and a rich and buttery whole grain topping.  It’s sure to become a springtime staple in your house. It probably doesn’t matter that this strawberry rhubarb crumble is a smidge healthier than some if I’ve made it 6 times in the last…

Cooking can definitely be a chore, but if you absolutely hate cooking there’s definitely something you can do about it.  Read on for the 10 reasons you might hate cooking, and what you can do to solve those problems!  The other day I was chopping cilantro and basking in it’s wonderful smell, and I started…

“> Orange Cashew Quinoa I can still hear my cute but sometimes purposely obnoxious husband’s voice echoing around the house like it was yesterday. “KEEENWAAAA” he said.  “KEEEEEEEEEEEENWAAAAAA” he repeated, louder and more emphatically. “I just can’t stop saying it, it’s such a strange word.  And look at it, it looks like fish eggs or…

Sometimes you make just have to make a huge scrumptious 3- layer cake, for no reason at all… Then you feel guilty for having that huge hunk of deliciousness staring you in the face so you say it’s for your daughter’s half-birthday.  But you don’t let her eat any…because she’s six months old, and that…

Control your holiday eating AND save some of that goodness for when you really need it later with this guide to storing and freezing holiday treats!   Hey everyone, I’m so glad to be back after the end of season 2 and the addition of our sweet baby boy to our family.   The transition has…