I often find myself perusing the aisles of the grocery store, looking at the overwhelming myriad of food products meant to make our lives better, healthier, easier, or faster.  Some of these items truly are useful time savers that I use during busy weeks (things like pre-chopped veggies, bagged salads, fresh salsa), but other items make me think “Why in the heck are people paying for this!?”

One of those items is Frozen Hash Browns.  If you are a frequent frozen hash browns buyer, don’t stress, I’m not here to judge, but it seriously just occurred to me, we are literally paying for shredded potatoes. That’s it.  Isn’t that something we could do at home!?? 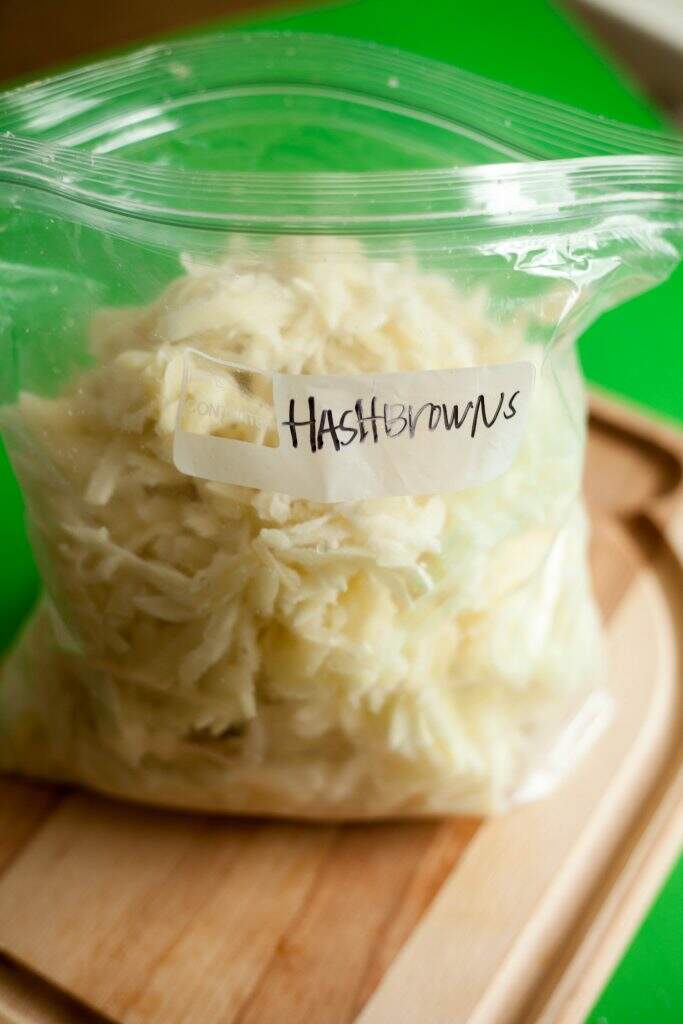 A little caveat here, frozen hash browns are certainly probably not the worst processed food you could be eating, so if you have no desire to make them yourself, you’re not gonna die.  Promise.  But, if you are stubborn like me and eventually want to find a homemade hack for every little grocery store convenience, you should probably jump on the bandwagon with me and try these homemade frozen hash browns.

Just in case you need a tad more convincing.  Hash browns probably aren’t the most expensive thing on your grocery list, I think they cost a dollar or two per bag, however, considering that a 10 lb bag of potatoes is usually approximately $2.50, you do actually save money making them yourself, and while it does take a little prep time, you can freeze them in gallon Ziploc bags for later use just like storebought hash browns. Homemade convenience food for the win.

In developing this recipe, I did learn that hash browns are the tiniest bit finicky.  Maybe that’s why people so often pay for the convenience, but after a little testing I have the perfect recipe for you to get perfectly crisp, delicious, taters every time.

The first time I tried this recipe, I didn’t pre-cook the potatoes, I simply peeled, grated, and pan-fried them.  Well, this was a failure.  Potatoes take awhile to cook, and cooking them from raw took too long causing the outsides to burn in the hot oil before the insides were fully cooked.  Not ideal.  Plus, the raw potatoes oxidized and turned brown SUPER quickly which was not appetizing in the least.  Yuck.

The next time I tried the recipe I boiled the potatoes until they were all the way tender before frying them.  While this was an improvement on the raw potatoes, the potatoes fell apart too easily thus making them very difficult to work with, so I went back to the drawing board.

The secret to perfect, crisp, delicious hash browns is a nice parboil on the potatoes.  Cooking them partway allows them to be cooked well enough not to turn brown and oxidize in the air, and to fry quickly enough. Not cooking them all the way allows them to keep their shape well enough that you get nice, separate hash browns that are easy to work with instead of potato mush.

I found that for my potatoes to be the perfect consistency, a 15 minute simmer was perfect, however it will vary based on your stove so you might have to do a little experimentation.  I would start to check your potatoes after about 10 minutes.  You should be able to pierce them fairly easily, but with a little resistance.  You don’t want them to be fall-apart fork-tender, but they should be softer than a raw potato.

I hope you enjoy these perfect, easy, homemade frozen hash browns, if you try them I don’t think you’ll be going back.

Are there any convenience foods that you think are so easy they should always be made at home!?  How about something you have always wanted to make from scratch but have never gotten around to learning. Leave a comment or send me a message, if I like it, you might just see your idea featured here!

As always, thanks for reading, and get to cooking breakfast!