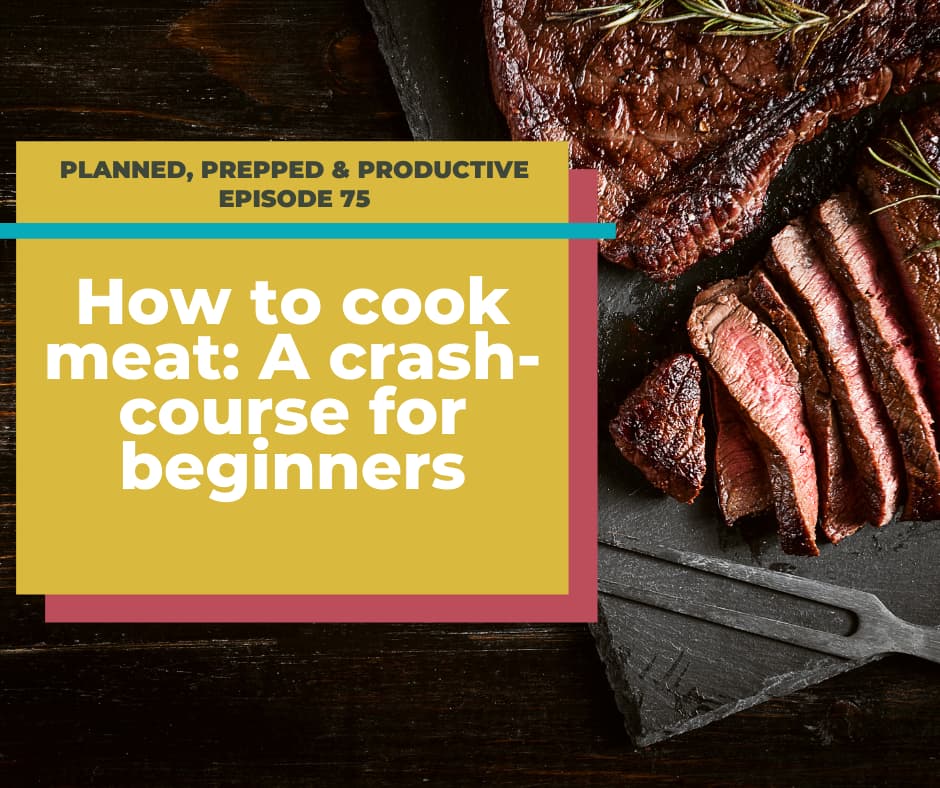 Cooking meat can be super intimidating, let that go with this handy guide how to cook meat: a crash course for beginners

My first time cooking ground beef in college, I remember staring at the recipe. It said something along the lines of “brown ground beef.”  I looked at the recipe, then at the pile of intimidating bright red, juicy ground beef taunting me.   Then I called my mom desperate for an answer.

“Mooooom, what does it meant to brown ground beef? What temperature do I put it on? How do I know it’s done?”

Thankfully the process wasn’t quite as daunting as I *thought* it was going to be, but the next few years of learning to cook meat definitely came with a lot of learning curves.  Just jumping in can be a scary process because meat is expensive. Not to mention, even though I’m no vegetarian or vegan, if I AM going to cook meat, I definitely want to do it right.

So, in this week’s episode of the podcast we’re going to do a crash-course in how to cook some of the more common types of meat in the easiest ways possible.

Let’s dive in on how to cook meat!

How to cook meat a crash-course for beginners

How to cook chicken

How to cook beef

Cooking beef is a bit more complicated than chicken only because there are so many different cuts to keep track of.  For the sake of this how to cook meat 101 we’re not going to get into detail about ALL of the different cuts of beef.  I will give you a few quick tips for determining whether your meat is lean and tough, or fatty and tender, as this is the most important information for you to know to determine how to cook it.

Generally speaking, tender cuts are more expensive and leaner tougher cuts are less expensive.  Both types of meat are tender and delicious when cooked properly, but you do have to choose the right method for the type of cut you have.

Another way to know is to look at the meat, fatty meat shows a lot of white marbling throughout.  Lean meat will be more uniform red in color and may show tough connective tissue.

How to cook pork

This tip with pork applies to beef as well, but it’s the easiest to talk about with pork.

When you’re trying to figure out whether a cut of meat is tender or tough, it’s helpful to consider what part of the animal it came from.  This is why it’s easiest with the pork because the cuts are often named after where they came from.  So a pork shoulder is going to be a tough cut of meat.  Why? Well a shoulder is a very muscular part of the body that gets a lot of use.

The pork tenderloin is found on the back of the pig, which gets much less use than say shoulder, but, leg muscles so it’s more tender.

How to cook Ground Meats

Cooking ground meats is easy! And the same techniques apply to any type.  The biggest mistake most cooks make is not heating the pan properly and essentially steaming their meat instead of properly browning it, but guess what? It’s honestly going to be fine either way so don’t stress about it. To cook ground meat, first heat your pan, then add oil and heat the oil, then add the meat and let it start to brown before breaking it up with a wooden spoon.  Don’t overcrowd the pan or you will steam your meat instead of browning it.  Use a bigger pan if you need to or cook in batches. Meats like sausage are already going to be seasoned.  For unseasoned meat add about 1 tsp kosher salt per lb of meat.

How to cook fish

Last we’re going to dig into fish.  There are a bunch of different types of fish, but they all will cook well using basic methods.  While some types of fish are more hearty and less delicate (Take salmon vs tilapia for example) basically all fish is relatively soft and delicate in comparison to other meats.  This means that the slow cooker is out for fish. BUT fish is actually one of my go-tos for fast dinners.  In general it cooks faster than other meats and it thaws WAY faster.  Meaning that if I forgot to pull it out of the freezer it’s no big deal. The three ways I cook fish are baking, pan-frying, and grilling.

Alright my friends, that is a super quick and dirty crash-course into how to cook meat.  I don’t expect you to remember all of it. It wasn’t meant to be crazy overwhelming (although it is a lot to remember).  Think of it more just that really cooking meat isn’t all that difficult, there’s just special considerations to take for all of the different types.  So bookmark this episode and pick just one kind of meat to try that maybe you’ve never cooked before.

Then let me know how it goes.

I am so excited to be welcoming my first guest to the planned prepped and productive podcast! Mastering Mealtime Mindset Ahuva Magder Hershkop is a Registered Dietitian and online course creator. She runs a brick and mortar pediatric based nutrition practice in Toronto, and teaches moms online everywhere to change their expectations and mindset about…

Cinnamon rolls are a decadent, drool-worthy brunch treat, but you know what’s not drool-worthy? At least not in a good way…waking up at the freakin’ crack of dawn to make cinnamon rolls for a brunch party or holiday treat.  Solve that problem and get piping hot make-ahead cinnamon rolls with one of these 4 methods. …

You’ve probably heard about the box meal delivery services everyone is trying out.  You might think that a service like this is the answer to all of your meal time woes.  Read on for a review of hellofresh from a skeptic to see what all the buzz is about.    Alright everyone, I teased this…

After about 7 years of creating from-scratch thanksgiving menu plans I have finally nailed down a selection of recipes that work every time, taste delicious, and can be prepped without too much stress and I’m so excited to share these recipes, as well as my best thanksgiving menu tips for success with you. First the…

I am so excited about this week’s episode of the podcast all about decision fatigue. Have you ever felt like at the end of the day a simple question from your child like can I have a snack is enough to make your head explode? There have been times where I have sat thinking about…

Do you feel like your responsibilities feeding yourself and feeding your family 3 square meals a day plus snacks brings out all of your worst negative feelings?  You’re not alone…there’s a lot of resentment from moms about their kitchen responsibilities.  But…did you know that the way you think about the kitchen has a direct effect…