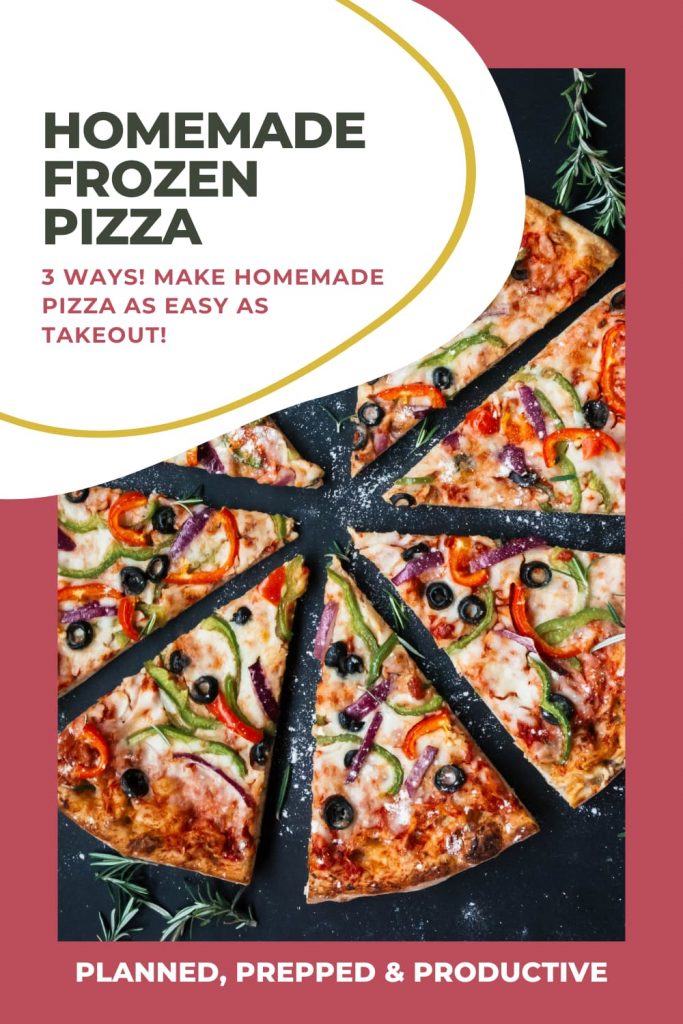 Making pizza at home can be super fun!

We love picking out all of our toppings and putting them together as a family, but honestly it’s not my favorite weeknight meal.

At least it’s not my favorite weeknight meal to make from scratch.

I mean takeout or frozen pizza can be a great break, but homemade pizza is a little tedious.  Making dough and rolling it out gets messy and when you have a big family it can be hard to juggle oven space for that much pizza!

The good news is that homemade pizza is a great thing to meal prep, and you even have several choices for how to do it!

Let’s dive into the 3 ways that we meal prep pizza making is a super quick and easy meal prep meal.

How to meal prep frozen pizza

So obviously the most challenging part of homemade pizza is the dough.

Homemade pizza dough is actually super simple to make when it comes to yeast breads (we honestly don’t even let it rise the full amount of time) but like I said rolling it out can get a little messy.

Also, for me when I make bread products I want t cook once and eat multiple times (hence why I parbake so often)

So how can you cook once and eat multiple times with pizza?

The first way is to make a frozen pizza just like you would buy at the store.

To do this, first you’ll want to make your pizza dough.  Here’s the recipe I use.  Feel free to double or even triple the recipe depending on how much freezer space you have.  One recipe will make enough dough for two standard sized pizzas (that fits in a pizza pan).

After you’ve mixed the dough let it sit for 15-20 minutes.  You don’t need to get a full rise, but a little rest will make it roll out easier and make it a little fluffier when you bake it.

After you’ve let it rest it’s time to roll it out.  Roll out as many crusts as you made dough for.  You can choose to make full-sized family pizzas or smaller personal pizzas.  The choice is yours!

After you roll them out put them on a greased pizza pan and bake them at 425 for about 8 minutes.  You won’t be cooking the crust all the way through, just enough to be able to add the toppings and freeze it with out it bending everywhere and making a huge mess!

Next you’ll want to make the sauce.  You can buy sauce as well, but this homemade sauce is so easy and takes literally 5 minutes.  I love that I can customize the flavors and make it exactly like I want it.

After you’ve made the sauce assemble your pizza with sauce, shredded cheese, and whatever toppings you like.  You could also choose to add your toppings fresh when you cook your pizza.  The choice is yours.

Then Wrap the pizzas well with saran wrap and freeze flat until you’re ready to eat them.

When you’re ready to eat them simply remove from the freezer and bake at 425 from frozen until the cheese is bubbly and the crust is browned.

Because the crust is the most time-consuming part of homemade pizza often I will just freeze the crusts instead of freezing whole pizzas.  Like I said before, assembling the pizzas as a family is part of the fun part so doing it this way allows us to have the fun family togetherness part without the mess.  It’s a win-win!

You can use the same recipe for the pizza crust, or another thing I like to do is make homemade naan bread and freeze that to use as pizza crust.

Usually when I opt for this version I do individual crusts instead of a large pizza crust, but you can do it both ways.

You can either parbake the pizza crusts, wrap them in saran wrap and freeze like you did for the last version OR you can cook them like you do naan on a hot skillet.

I have found that the crusts don’t really stick to each other so you can just throw them all in a gallon ziploc bag or reusable ziploc and freeze them until you are ready to use them.

When you want to eat them, simply pull from the freezer, add toppings and sauce, and bake at 425 until bubble and crispy.

The last way to meal prep homemade frozen pizza is to freeze the dough.  This isn’t my favorite method simply because it requires me to remember to thaw the dough in time for dinner, but it does work well.

To freeze the dough simply mix the dough, roll into a ball, wrap in saran wrap in individual pizza sizes and freeze in a ziploc bag.

When you are ready to use them pull them from the freezer and let them thaw for 2-3 hours before rolling out and baking.  I like to parbake my crust even if I’m using this method because it gives you a crispier crust than you can usually get in a home oven, but you could also add your toppings straight on and bake on a preheated pizza stone to get a nice crispy crusty.

Okay so there you have it! homemade frozen pizza 3 ways!

I hope this motivates you to make homemade pizza more often instead of always turning to take out, and I hope this makes it possible and easy to do it on a weeknight whenever you get that pizza craving!

Next week we’re talking about cleaning.  One of the biggest things people hate about cooking is all the clean-up.  We’re going to talk about how you can set yourselfup for cleaning success nad clean the kitchen FAST!

Thanks for tuning in!