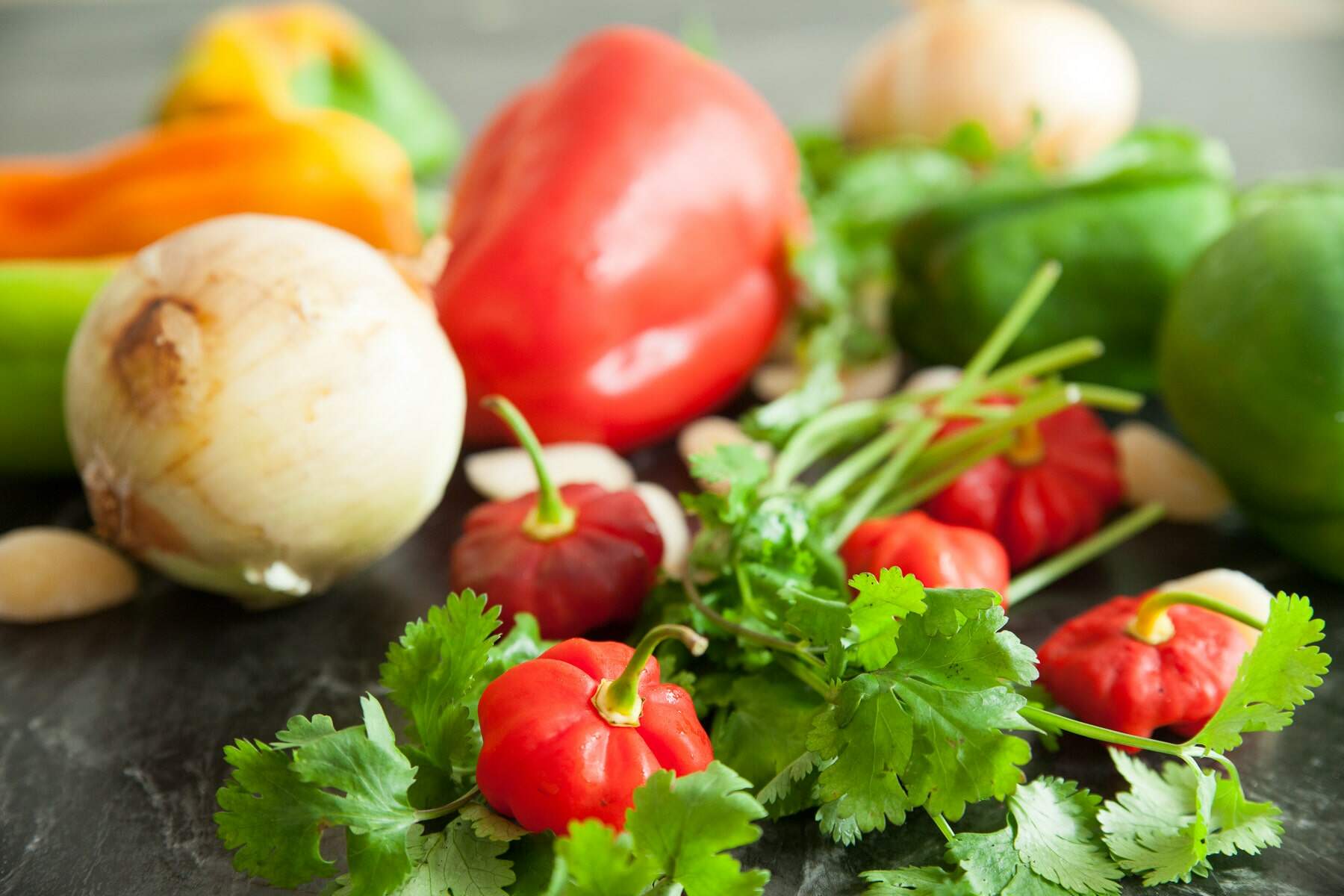 Puerto Rican Sofrito is a flavor base in Puerto Rican cooking and is key to achieving puerto rican flavor in a wide variety of dishes.  This aromatic blend of peppers and garlic packs a punch of flavor without being spicy or over the top.  You’ll love how easy it is to make and the flavor it adds.

Time for round 2 of my puerto rican recipe series to encourage help and donations for victims of hurricane maria in Puerto Rico. This time we’re talking about Puerto Rican sofrito but first things first, I want to introduce a charity working to help Puerto Ricans that you might consider donating to.

Light up puerto rico is leading an effort to provide light and power to those in Puerto Rico who are closing in on a month without power.  Cool thing, this organization will be providing my grandparents with a generator so now they are able to keep some food and medications cold.  When there power is restored their generator will be passed on to another family in need. So cool!

100% of the donations to the organization will be directed at providing light and power to puerto ricans (-3% taken by the crowdfunding website).  You can check out more about them by visiting their FB page, or donate via youcaring.com

Most of the recipes in my Puerto Rican cooking arsenal are recipes I have been making year after year, but this Puerto Rican sofrito recipe was a new (and luckily successful) undertaking for me.

Puerto rican sofrito is basically the foundation of puerto rican cooking (so it’s about time I learned how to make it, right?).  The best way I can explain it is like a salsa that goes into many of their popular dishes including but  not limited to: habichuelas guisadas, pollo guisado, carne guisado, arroz con gandules, arroz con pollo etc…you get the picture.

You’d think I’d have a recipe for this downpat, but instead I’ve been relying on my dear grandmother who always got her sofrito from a local woman and packs it up in her suitcase every time to visit.  One time when I was desperate she even paid to overnight it to me making it a $50 container of puerto rican sofrito (grandmas are the best!)

Sadly, this year our puerto rican sofrito maker passed away.  Her sofrito was the very best so I was pretty nervous to tackle it on my own, but with no other options I decided to get in the kitchen and try it out for myself.  While I didn’t quite reach her level of greatness, this recipe is pretty darn’d delicious and will be great for sticking your toes into puerto rican cooking if you so desire.

How to make puerto rican sofrito

Puerto Rican sofrito couldn’t be easier to make.  It’s literally a matter of chopping up peppers, onions, herb, and garlic and blending it up into a sauce in a food processor.  That’s it.  The tricky part is finding the ingredients needed to make puerto rican sofrito in the midwest.  So i’ll try to give a little guide for how I got the tricky to find ingredients, and some substitutions you can make if you don’t have any luck

Where to find Aji Dulce Peppers for Puerto Rican Sofrito

What is an aji dulce pepper?

Aji dulce peppers are a gorgeous, bright red pepper that is similar in shape and flavor to a habanero but without the heat.  It tastes sweet and similar to a red bell pepper or one of those cute mini peppers.

I have had zero luck finding these adorable little peppers at any local markets in my area.  This year I combated that problem by growing my own. I purchased the plant starts on ebay and they did great!  I hardly took care of them and ended up with lots of peppers!

If you don’t want to grow your own, I tested it subbing a bell pepper and while there was a discernible difference it tasted pretty similar.  I think you could also sub some of the tiny cute peppers you see on veggie trays.

Recao is an herb that is a close cousin to cilantro.  It’s also called “culantro” and no, it’s not the same as cilantro.  It’s flavor is similar although I think it’s a bit more mild, and almost has a slight minty flavor.  It has spiny leaves and is sometimes called spiny cilantro as well (see a picture here).

I had much more luck finding recao locally.  It is used in many cuisines in addition to puerto rican including thai, vietnamese, and mexican.  I checked lots of my local asian market and many said they stocked it at times (though I wasn’t lucky enough to actually find it).  Ultimately I found it at a local Mexican market.

If you can’t find it you can add a bit extra cilantro or just leave it out and it will turn out pretty well.

As I mentioned, puerto rican sofrito is key to many puerto rican recipes.  Generally, the recipe will tell you how to use it but in case you are unsure I’ll give a quick guide.

This herb and vegetable mix is potent (delicious, but a little goes a long way).  You should only need to add about 2 tbsp to most recipes for an awesome punch of flavor.  I like to add it to the hot pan first until it’s aromatic to cook the raw veggies for a minute.

Feel free to try adding this to any stew type recipe, I think you’ll be hooked once you try it!

If you want another rockin’ puerto rican recipe, be sure to check out my non-alcoholic pina colada recipe.

These homemade buttery garlic knots are so addicting, there’s no way you can eat just one! This recipe also comes with freezer instructions so you can be eating amazing butterly garlicky goodness whenever you crave them in just 10 minutes from the freezer! Who else has been baking up a storm over the last few…

I recently put a poll out on social media to see what you all are making on the days you feel drained and not able to put in much energy in the kitchen. Spaghetti was one of the most popular answers (and with good reason!) Spaghetti comes together so quickly, is pretty well accepted by…

“> Homemade Dulce De Leche Cheesecake is rich and decadent.  Its filling is lightly sweetened by rich dulce de leche, the crust is crisp and buttery and its topped with toffee pieces for a pleasant crunch.  This is the perfect dessert for a special occasion and it’s sure to impress even the toughest critics. Dulce…

” /> Cheesecake. Yum. White Chocolate Raspberry Cheesecake with a thick buttery oreo crust.  Double Yum. Seriously though.  I absolutely love cheesecake.  When I was a kid I didn’t really like cake (don’t worry, I’ve grown up and changed my ways.  Find evidence here.)  Anyway, I remember my mom getting creative with birthday items for…

Meal Prep Grilled chicken (No Marinade!) Shortly after I discovered meal prepping shredded chicken I started to become obsessed with creating convenience foods to store in my freezer for from-scratch meals any time I want them. Enter this meal prep grilled chicken (with no marinade!) While it’s not quite as hands-off as my slow cooker…